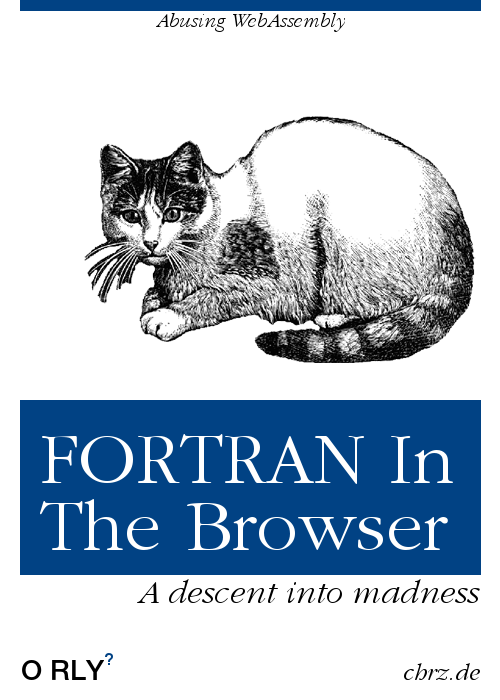 Your scientists were so preoccupied with whether or not they could, they didn’t stop to think if they should.

I wanted to learn more about WebAssembly (Wasm), the new and cool kid in town. When testing out a new technology, you should always know why you are doing this and what you want to achieve. Except sometimes, it is just way more enjoyable to just sit back and watch the world burn.

What is something so insane, that it might just be useful again? The answer of course follows the long tradition of using already asinine and/or arcane technologies in domains they were not designed for. Nodejs? Already done. No. We need something truly Webscale. Enter: Full-Stack FORTRAN.

Fortran is one of the oldest programming languages, preceding even C. It is a compiled language mostly used in high performance computing and for scientific simulations. It excels in number crunching and support for distributing work in a cluster (OpenMP, MPI etc.), but pretty much cant do anything else. Think C99 without the many libraries. Text processing? Possible, but cumbersome. Networking? Well, you could bind to the C library … you see where this is going.

I have been using Fortran for multiple years now in the context of geoscientific simulations in HPC. But I am also a web developer. Now it is time to join both of these worlds.

All memes aside, why am I spending time on this project? There are many excellent and battle-tested math libraries written in Fortran, for example BLAS and LAPACK/LINPACK on which higher-level frameworks like Matlab or SciPy depend. Wouldn’t it be awesome to use these technologies in the Browser? Think client-side Jupyter Notebooks, like Iodide.

But, baby steps. To begin, I wanted to build a small program running in the browser with its core written in Fortran.

A slow descent into madness

The most popular toolchain for Wasm is Emscripten with Binaryen. It provides compilers based on LLVM and a good part of the C standard library ported to Wasm and JavaScript. For example, you can write to the standard output and it will show up in the browser console. Or you can access files and the browsers’ local storage will be used.

Unfortunately Emscripten does not support Fortran. Why? First of all, most platforms Fortran is used on are 64 bit, 128 bit or something else entirely. Wasm on the other hand must be compiled as 32 Bit, the 64 Bit variant is not yet implemented in the browsers or compilers, nor is the specification complete. For code that does not use any pointers (lol), this problem can be mostly ignored, but really we should find a 32 bit capable compiler.

The next problem is the lack of a standard library. Fortran was not invented with portability in mind, so most compilers provide and link their own custom library.

I isolated about 4 different ways to approach the compilation of Fortran to Wasm, all of which depend on LLVM.

LFortran is a very recent and very alpha project which aims to build an interactive compiler for the use in REPLs. However, it can also be used as a traditional compiler. It is based on LLVM and thus should be able to emit 32 bit Wasm.

At the time of writing it is missing a lot of features and only supports a very small subset of Fortran.

You can find my tests using LFortran here: Full-Stack-Fortran/tree/lfortran.

Flang-7 is a compiler based on the PGI compiler. It is also based on LLVM and able to emit LLVM IR as well as build binaries. Sadly, it only compiles to 64 bit.

It is still usable for small code examples, but pointers will be 64 bit which makes interfacing with any library hard.

You can find my tests using Flang-7 here: Full-Stack-Fortran/tree/flang-7.

F18 is the new Fortran frontend for LLVM, which will eventually replace flang-7. It is currently in beta, and missed the release window for LLVM 10.0. At the time of writing, it does not support code generation yet, and instead only provides a parser. It compiles code by parsing it, converting the parse tree back to Fortran, and then passing that code to an external Fortran compiler. By default this is the PGI compiler.

Now, the bitness depends on the backend compiler used. The PGI compiler stopped supporting 32 bit in 2017, and only the most recent version is freely available in form of a community license.

You can find my tests using F18 here: Full-Stack-Fortran/tree/f18.

Dragonegg is a plugin for the GNU compilers. It uses GCC as the frontend and compiles the GCCs IR (GIMPLE) via LLVM. Thus it is able to emit LLVM IR or even compile to wasm.

Dragonegg is pretty old. the last supported versions of GCC and LLVM are ggc-4.6 (maybe 4.8) and llvm-3.3. This is bad because LLVM 3.3 does not support wasm and the IR format of LLVM 3.3 is not compatible with the newer versions of LLVM that do support wasm.

There are forks of dragonegg on GitHub, which claim to support more recent versions of LLVM and GCC. The only fork I got to compile is this, which is a fork of this (which claims to support GCC 8 and LLVM 6), which is a fork of the original. This did in fact emit compatible IR, but did not include any code from my functions. I have to investigate this further, maybe some stage optimizes away all user code because it is detected as unreachable.

After some time, I found out that while the textual representation of the LLVM IR was incompatible between LLVM 3.3 and >3.7, the binary bitcode was still compatible.

The AOCC by AMD is a LLVM based compiler with extended optimization support for AMD platforms like Ryzen. It includes a flang-7 version. It also ships with a custom version of dragonegg.

You can find my tests using AOCC here: Full-Stack-Fortran/tree/aocc.

Wait For The Future

Hopefully, the 64 bit variant of Wasm will be ready soon. Then we should be able to use most of the existing Fortran LLVM compilers.

Also, the F18 frontend should be finished soon and release possibly already with LLVM 11.0, maybe even without the dependency on an external PGI compiler?

We could also acquire a 32-Bit PGI compiler for a lot of money and hope that it is able to emit LLVM IR.

Chapter 2: Setting Up The Toolchain

After a few days of experimentation, I chose Ubuntu in Docker with the latest Emscripten. The gfortran runtime and LAPACK library are built during the compilation of the Docker image.

To integrate the dragonegg-gcc with the emscripten LLVM stack, I wrote a small wrapper script that acts a a Fortran to LLVM bitcode compiler.

The script also adjusts the LLVM target triplet in order for emscripten to accept the code.

For the rest of the toolchain I used the following sources:

The dockerfile consists of two stages, in order to keep the size of the image down. To begin, it sets up Ubuntu and installs the required packages:

Then, the toolchain elements are downloaded and built one after another:

The second stage just installs the binary packages instead of the development versions, and copies the generated assets from the first stage:

I actually got the flang-7 runtime library to compile to wasm, but I did not end up using it. Because Emscripten uses musl, a few patches were needed for the flang runtime. Also, I modified the CMake definitions to only build the libraries without bootstrapping and building the compiler itself. I also removed AIO/threads support, even though this might be possible using Emscriptens’ pthread. The library only gets compiled to LLVM IR, to be used by Emscripten later on. Check it out here: https://github.com/StarGate01/flang

Instead, I managed to compile the entirety of libgfortran to LLVM IR. I had to jump a few hoops, but together with emscriptens’ libc this provides a complete gFortran runtime in the browser.

Because Wasm only supports a maximum float size of 64 bit, quad-precision math is not supported. Also, complex numbers wont compile that well (yet, this is under investigation). Because I could not find a way to actually bootstrap the compiler in wasm, I built libgfortran “out-of-tree”, using my own makefile instead of using the provided autotools scripts. I adjusted the required configuration files by hand.

The makefile just gathers all sources and compiles them using the correct compilers. After that, it packs them into a static library archive.

This yields a ~3MB libgfortran.a library, about the same size as the one on my x86_64 PC. However, when building against this library, only the code actually used gets included in the final binary (link-time-optimization). A reasonable Fortran program (the LAPACK tests) together with libc, the emscripten adapters and libgfortran is about 400KB in size.

The aim for my first test was to compile a simple function, and call it from JavaScript. To compile my test code, I used a very similar makefile as above.

And rejoice, The development console displays Hello from Fortran!. This means that the gFortran runtime and its binding to libc work as expected.

To call this function from JavaScript, Emscripten helps us a lot:

Next up, I wanted to call functions implemented in C. I wrote a small C library:

Then I wrote a binding in Fortran to this function, and to various other libc functions like write. Because we actually have a runtime, the binding is really easy due to iso_c_binding.

Calling the function is easy:

Of course, the makefile has to be adjusted to build and link the object files correctly, it is still very similar to the gFortran makefile.

To truly test the runtime, I compiled the compatible parts of LAPACK and BLAS. The makefile had to be correctly configured, but then it compiled just fine for single and double precision.

Update: It now compiles for complex numbers as well.

While you were reading this article, the test scripts have already run. So open up the developer console and check it out!

All of the source code from this article, and the toolchain Docker image:

9 Replies to “FORTRAN In The Browser”